Dedicated to a Healthy Legacy

Welcome! There's much to see here please look around and learn all there is to know about us. And we hope you enjoy our site! 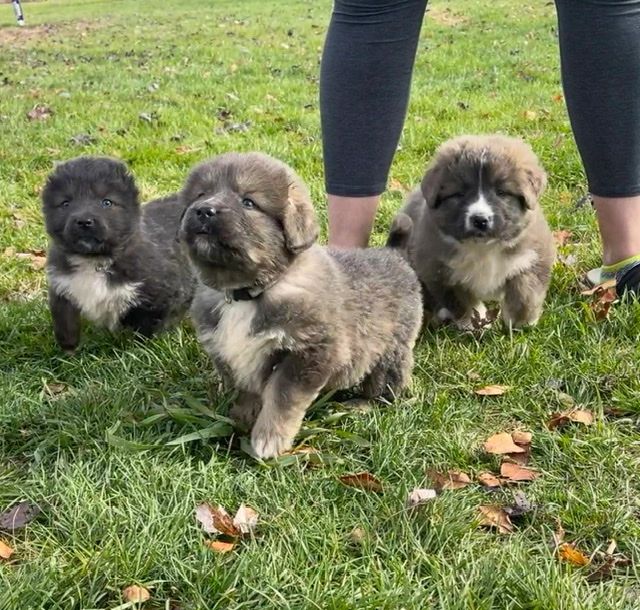 Sorry no Puppies available at this time!
We have 2 breedings planed for the beginning of  January, then one in February 2023!

About The Caucasian Shepherd Breed

First I‘d like to point out that Ovcharka is merely a Russian word for "shepherd dog" and that I never understood why in some countries you see breeders translate one part of the breed's name, not transliterate the other. This has created a lot of confusion and many people are under the false impression that the word "Ovcharka" is somehow a breed/breed type by itself. Of course that is not true, the same way that the term "Shepherd Dog" is not a breed by itself, but rather a suffix found in the names of many different dog breeds in the English language. For example, Anatolian Shepherd Dog and the German Shepherd Dog both have the "shepherd dog" part in their name, but they are two very different type of dogs.I would also like to point out that here is no "T" in the Russian word Ovcharka (Oвчарка). I prefer to call this breed the Caucasian shepherd dog (which is the accurate translation of the breed's name as recognized by the FCI), but Caucasian Ovcharka or Caucasian Mountain dog is fine too. When abbreviating the breed's name  the term "CO"is often used. As this is the most common abbreviation used for this breed in the English language.The Caucasian Shepherd dog is a serious guardian breed and should never be taken lightly. The Caucasian is bold, fearless, self-confident and fierce when a threat is present, but he is soft, devoted, kind and endearing to his family, including other family pets. Loyal, strong, and courageous, the Caucasian Shepherd Dog is a fierce family protector bred to care for flocks and defend the home against wild predators. This massive breed is highly territorial and won’t back down from a fight, even against bears or wolves. Caucasian Shepherd Dogs are intelligent, but their stubborn, independent nature can make them difficult to train, and their natural distrust of strangers and other animals can lead to aggressive tendencies if they are not kept in check by an experienced trainer. There for they are not a good choice for novice owners, and though they are fairly low-energy dogs, the sheer size of Caucasian Shepherd Dogs makes them poorly suited for apartment living. For safety, because they are an intelligent and independent breed, they should be kept contained when exercised, such as in a fenced yard and on-leash when being walked.

About the breed continued

Anyone interested in a CO needs to make sure they really want a large, powerful, protective and independent dog.CO's like to "think", they are not the type of breed that will follow every command blindly and often can be quite dominant in character. A Caucasian shepherd needs experienced owners.They should only be owned by knowledgeable, responsible people that have a lot of space and are looking for a great property/livestock guardian. Well fenced property is a must for this breed, I can not stress that one enough. They are one of the most naturally protective breeds out there (in other words: you don't have to train them to protect their property from strangers). As I mentioned above, do not waste your time or money on a CO until the property is properly fenced.Owning a CO on a property that's not fenced properly is a huge liability and is just asking for trouble. CO's will react to a real or perceived threat with no hesitation. Owning these dogs is a tremendous responsibility; to both the public and to the dog. They should never be taken for granted, even the best trained CO can reacted without notice or command.

A Little About Us

All our dogs except 3 are FCI legal Imports from Russia, Ukraine, Romania, Slovakia and Bulgaria. Our  US born females are from imported parents. Our dogs also come from excellent bloodlines overseas that are also from championship parents and are quadruple registered through FCI, UKC,AKC(FSS) and ARBA. We also do DNA health and breed testing through Embark and/or Wisdom panel  for all the adults in our breeding program. In the beginning we started out with just one Caucasian for our chicken flock protection. That‘s when our love for the breed started and grew from there. It has continued to grow ever since then. We currently own 13 COs, when picking out a puppy to add to our breeding program we look for numerous different things in that particular dog. Things that can be past on when breeding the male and female together to hopefully make the ideal pup that people a looking for. Our goal here at Royal Caucasian Shepherds is to breed happy healthy pups with great temperament and proportionately correct body structure with healthy bones and joints. So they can be the happiest, long living family pet and loyal companion and still be the protection breed it was design for. Most of our pack spend the majority of their time together whether it be running free on our 6 acre fenced in yard Or just chilling in the house with us.

We support Shelters & Rescues! Part of proceeds are donated!

Calls & voicemails are not answered unless you have already been through the approval process!! We are sorry for any inconvenience but call volumes are too high to just want answers to basic questions. Thank you 😊

Our Puppies Go Fast! Reserve Yours Before It’s Too Late!

ALL DEPOSITS ARE NON REFUNDABLE!

PLEASE DO NOT SEND A DEPOSIT WITHOUT APPROVAL!
Requirements must be met before you can reserve a puppy.
Please visit our puppy adoption page to fill out an application.
All deposits are non refundable.